The dons on the eve of the First World War

Osbert Crawford (1886-1957), son of an Indian civil servant, later a distinguished archaeologist and founder editor of the journal Antiquity, came up to Keble from Marlborough in 1905 to read for Classics Mods, switching to the Diploma in Geography thereafter.

As he wrote in his autobiography, ‘Going from Greats to Geography was like leaving the parlour for the basement; one lost caste, but one did see life’. He rowed for the College and was Captain of the First VIII in 1908. In an interview transcribed after the Second World War, he recalls the Warden and tutors of his undergraduate career, bringing them vividly to life. What follows is a transcription of an interview with him. 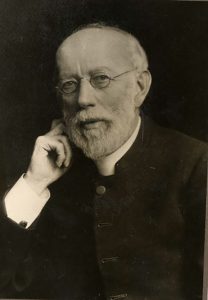 The Warden, ‘Cac’ [Walter Lock], a wise, kindly, and dignified figure, respected by all, a good preacher, a man of great endurance – did he not have some of us at his breakfast table every day, or was it only on selected days, during every term? Tolerant, yes – and he needed to be in those days of compulsory chapels (compounded by some for £1 a term). Alert minded he knew us all, or was clever enough to make each of us think so, which was as good). Probably as good a man as could be chosen for a most difficult post.

The Sub Warden, Tracey (Traggers, I think, to us): all I remember is his lectures on Herodotus, read out and to be taken down verbatim, an hour at a time, yea to the very end of the hour, the worst possible form of lecture: and his dinners, the formal invitation, the dinner jacket de rigueur, and so too the game of cards which followed. We had to conform willy-nilly, and as an anti-cardite, I loathed the business. We were forcibly initiated, so that when we were later on ejected into Polite Society we might behave as perfect little gentlemen. Poor dears, they lived to see the Polite Society, soon to be shaken by Lloyd George, wrecked by the First War, which killed so many of their summer guests.

The Dean, Bumbo Hicks, Hail Fellow well met, probably knew us all individually as well as did the Warden, perhaps even better, but gave the opposite impression – of pretending to know but having forgotten. Always in a hurry, no time to spare, too busy. Just the opposite of Billy Reade, calm, aloof, cold-blooded (to appearance), a little roving elephantine eye that missed nothing, a perfect philosopher, a fine brain, a nature feline rather than reptilian. No more, however, for he and I were poles apart, I immature, enthusiastic about things he cared nothing about and probably despised, he eminently mature, dwelling aloft in a world that seemed unreal. But he probably got through twice as much real work in half the time that his great friend Bumbo would have taken. Witty in a donnish way, but definitely a damper in company, so it seemed to me; yet we felt he loved their company better than anything else in the world. A don’s don perhaps rather than an undergrad’s. Well, perhaps all this is grossly unjust to him … I was a terrible prig then.

Crab Owen, my tutor, by far the most lovable and charming of all the dons. ‘He is a  poet’, said Cac, … adding how glad he was that he had lured him away from Cheltenham. His beaming face (never successfully cleared of stubble), his crossed arm (once broken and never properly mended) covered with cigarette ash, his wit of immense vitality, his amazing memory for exact dates of trivial events – a pleasing trait. He loved us all and we all loved him. An ideal teacher, intensely interested in us and in what he tried to teach us. A fine appreciation of literature and of the pedantry that too often passed for it. A tolerant and often blind eye for youthful misdemeanours; he was always on our side and we knew it.

Mathieson, as I recall him, rather remote in the grandeur of a fourth year, resplendent both in work and play, a heroic figure linking us with the Senior Common Room, the essence of a Keble man, and a Scotsman to the core.

Jackson and science: what sort of science? We weren’t quite sure, but something a bit off the beaten track, and a bit suspect in Keble anyway. Rather colourless to us, but liked so far as we had any contacts, which was not very far. Morgan, a brilliant History tutor, a sharp little man with a short sharp blackish beard who built up a great reputation in his job, and turned out some useful Honours degrees.

Jervoise, the Bursar, rather a dim figure, soon to be faded out and succeeded by the more flamboyant Champernowne. Champernowne was obviously a stray from some bit of Polite Society (in the west Country?), and a bit alien we felt (or should it be, ‘I’ felt?).