Douglas Price was an undergraduate at Keble between 1933 and 1936, and worked for a B Litt thereafter. His military service in the Second World War culminated in his appointment to the Head  of the Historical Section of SHAEF. He returned to Keble as History Tutor in 1949, and spent the rest of his working life in service to the College. He was Dean between 1950 and 1962. 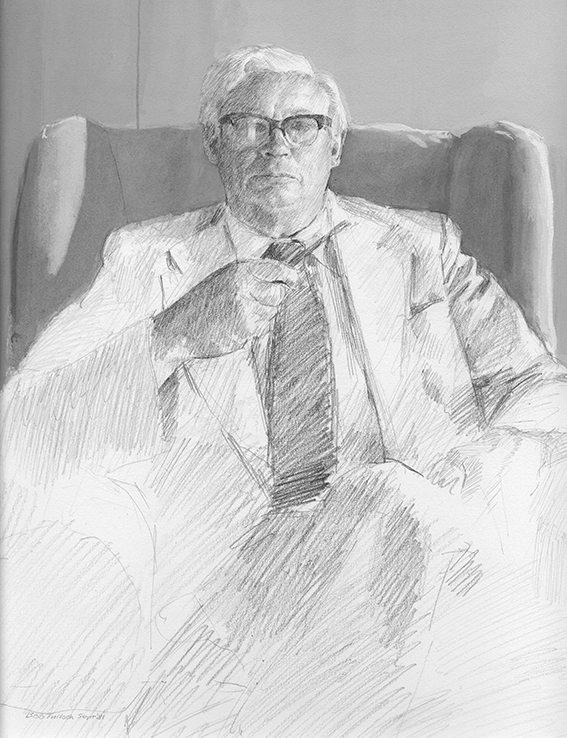 Douglas Price’s diaries record much of the administrative and tutorial grind of the long-serving History Fellow, Editor of the Record, and College Dean.

The week beginning Monday 29 February 1960 might be taken as typical, though Price records Hilary as his consistently heaviest teaching term. In that week he gave twenty tutorials (three of them on Saturday morning); he gave a lecture (one hour), and held a Faculty documents class (one-and–a half hours). No sessions with graduates are recorded that week, though they appear occasionally elsewhere. He nevertheless contrived to keep the early part of the afternoon free, taking strolls in the parks, or driving to Wigginton where he kept a house. During that week there was one trip to London by the 12.15 pm train to do transcription work in the library of the Society of Antiquaries, but he was back in Oxford by 7.30 pm. On Thursday 3 March he records casting his vote in the election for Chancellor for the University, the occasion when Harold Macmillan beat Oliver Franks by a narrow margin. On the Saturday he lunched with several old members up to vote in the election, and in the afternoon picked up a friend from Wigginton to drive him into Oxford to vote. There were a variety of College and University related dinners: on Tuesday he attended the Smaller Association (a dining society of Faculty members) Dinner and on Thursday he was a guest of the Officer Training Corps. He dined in College on the Friday evening, and was entertained with colleagues by the JCR after dinner, after which he discussed appeal business with Davidge and others for an hour-and-a-half. On the Saturday evening he gave a dinner party in his rooms in College (catered for by the chef) prior to attending a performance of Purcell’s Dido and Aeneas by the Keble College Musical Society at the Wesley Memorial Church. His Sunday was taken up with a lunch engagement at Cuddesdon, a Sunday school class at 2 pm; a session of correspondence and report writing in College, followed by Evensong at 6.00 pm. If the week had an unusual feature it was that there was no College meeting, but it is clear that gaps in the schedule were filled with the mundane task of testimonial writing.

It is striking just how much of Price’s routines revolved around the College. He regularly describes discussions on matters of College business into the early hours of the morning, and the hosting of student after-dinner celebrations in his rooms. Vacation schedules were less punishing, as his research was not a constant preoccupation, but Price spent a lot of time on The Record and later on advowsons business.

Like Douglas Price Ian Archer is a sixteenth century historian. He arrived as History Tutor in 1991. 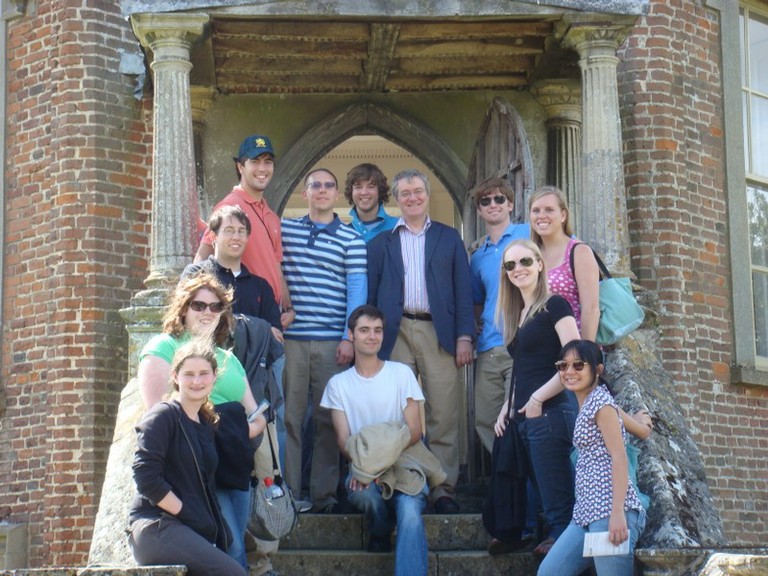 Dr Ian Archer with a group of University of Georgia students on a field trip to Melford Hall, July 2007

In the equivalent week (beginning Monday 26 February) in Hilary term 2007, his week was similar in some ways but very different in others.

There were only six tutorials, but also a lecture (one hour) and a Faculty class (two hours), and two one-hour sessions with graduate students. These teaching engagements generated three hours of marking (much of it actually done in the Douglas Price Room, which operated as a café in term time), and in the case of the class an equivalent amount of preparation. The administrative load was probably similar to that faced nearly half a century ago, but differently directed. Dr Archer acts as Adviser to the Learning Institute (which provides staff development courses): in that capacity he held a planning meeting with a colleague (one hour), hosted a two hour seminar on training in lecturing, attended a trouble-shooting meeting at one Faculty where problems in induction arrangements had been identified, and met with the Head and Secretary of the Humanities Division to discuss financial arrangements for the following year. Research was also more prominent: on Tuesday he attended the brown bag lunch meeting of the early modern British historians to hear a paper by Blair Worden; on Wednesday he attended a lunch time meeting at Jesus College with two colleagues to discuss plans for a new edition of Holinshed’s Chronicles; this was by way of preparation for another meeting on Friday (again starting over lunch and in the rather plush surroundings of the Printing House of the University Press, but carrying on for a couple of hours). Another lunch time meeting on Thursday was held with a Faculty colleague who was to take on tuition for a student with pastoral problems, and required briefing. Evening engagements included dinner at home with the other Keble History colleagues (Monday), attendance at a student produced play at the Old Fire Station after a quick sandwich (Tuesday), attending the History Society meeting and hosting the speaker, Richard Bonney to dinner (Wednesday), as SCR President hosting the Wine Tasting in the Common Room, prior to dining in St John’s as the guest of another historian colleague (Thursday), and attending a guest night in College (Friday), for which he had to prepare seating plans in the morning, as well as hosting dessert. The weekend was spent largely in preparation of a lecture to be given to sixth formers in London on the subject of Tudor rebellions (delivered the following Monday), and student report writing though he attended chapel on Sunday, and dined in College afterwards. In that week he sent 104 e-mails, several relating to other areas of responsibility not mentioned above, such as the College website, the ongoing reform of the College’s disciplinary procedures, and his roles as Literary Director of the Royal Historical Society and General Editor of its online Bibliography of British and Irish History.