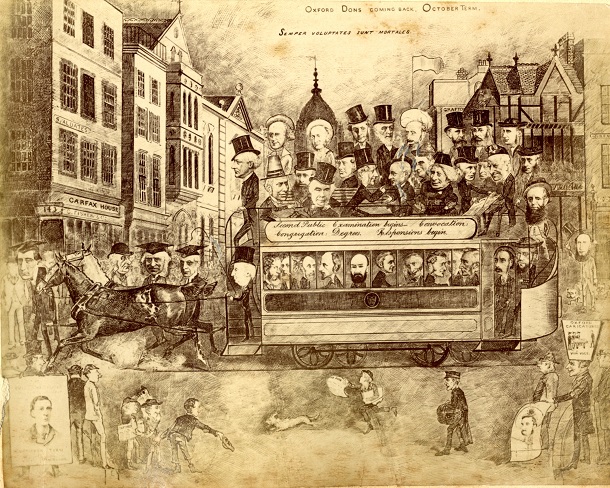 Named after the revered leader of the Oxford Movement and conceived by some of the most devoted Tractarians of the time, it is not surprising that the academic aims of the new College were viewed with suspicion. Many felt that the College would be nothing more than a seminary, churning out Anglo-Catholic priests to send across the globe.

However, it was never the intention of the Memorial Fund simply to create a theological college. In 1866, J T Coleridge, a leading judge, friend of John Keble and a supporter of the Fund stated in The Times “It is assumed what we have in view is… a Clerical College… But this is not our scheme… All our students will be instructed in the ordinary studies of the University”. However, there was a very real danger that the overall academic approach of the College would be constrained by the conservative beliefs of notable figures such as Pusey (close friend of John Keble’s and a fellow Tractarian) and Liddon (Tractarian and acolyte of Pusey), who continued to oppose such University-wide measures as the abolition of religious tests. 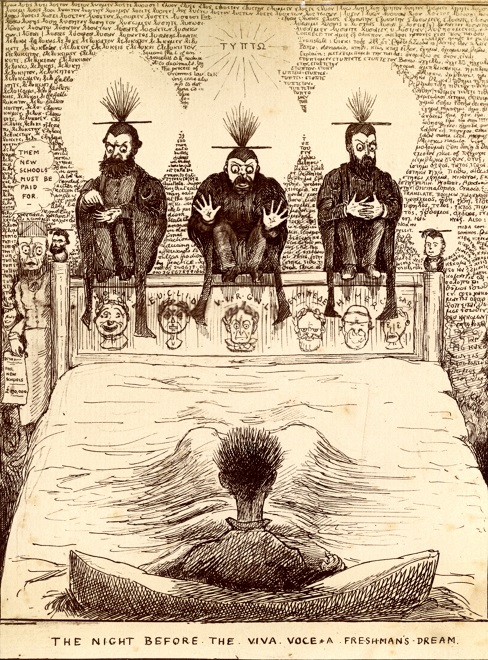 AD 62/3/21 – Black and white photograph of a cartoon labelled ‘The Night before the Viva Voce. A Freshman’s dream’

The sceptics could have been proved right, had it not been for the College’s extraordinary first Warden – Edward Talbot. Although selected for the role by conservative members of the Memorial Fund, they soon grumbled that Talbot “had not the church character of Keble at heart so much as its academic well-being”. He saw new fields of study as areas in which the relevance of eternal truths could be further demonstrated and, along with several Keble tutors, contributed articles to a collection of theological essays, titled Lux Mundi, which argued that evolution should be incorporated into Christian theology. As such, he insisted on the admission to the College of men reading wide range of subjects and by 1881, the fledgling College, originally mocked as little more than a monastery, was the only college to be represented in all final schools.

One issue that continued to affect the academic standing of the College was that of finance. The College’s lack of endowment was initially a source of relief to those who feared avaricious government interference. However, relief turned to panic as the College came under enormous pressure to recruit sufficient numbers of students, as fees were the primary means of income. 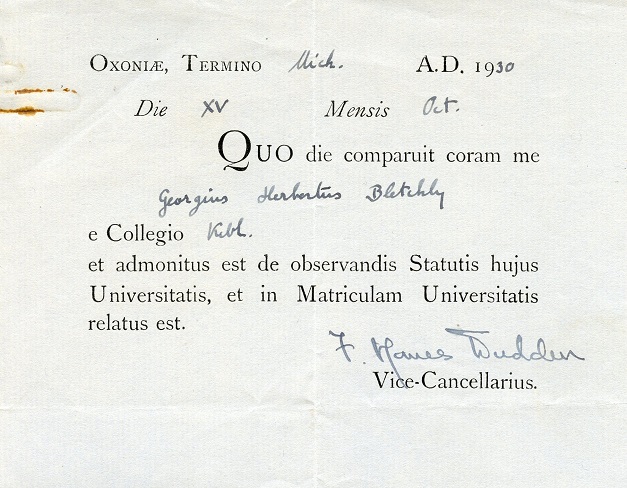 One of the ways the College ensured it had a high enough intake was to accept those reading for a pass degree. The pass degree was not subject specific, was modular, and was less demanding than an honours degree. At a time when some colleges were beginning to insist that a larger percentage of their candidates were reading for honours degrees, “pass men” provided a valuable income stream for Keble (21% of undergraduates in 1921).

It was partially in response to the need to attract applicants that the College further diversified the subjects offered. In 1870, 4 honours schools were being read for, rising to 11 in 1935. Most of these subjects were offered through “farming out” – where students had to attend tutorials at other colleges. The students of the 1940s were expected to be rather more self sufficient than those of today and to organise their own tutorials.

Whilst the number of fellows might not have increased, their status certainly did. The original Keble charter had deliberately appointed an external council (thus keeping control of the College out of the hands of potentially radical academics), which in turn had led to issues with the recruitment and retention of tutors. However, in 1930 the College Council surrendered the whole internal administration of the College to the Warden and tutors, who became fellows and could finally direct the academic life of the College.

Whilst Keble initially resisted increasing student numbers the financial situation of the College made this impossible to sustain and when government grants for higher education were introduced in 1962, numbers began to climb – from an annual intake of 89 undergraduates in 1955 to 130 in 1975. 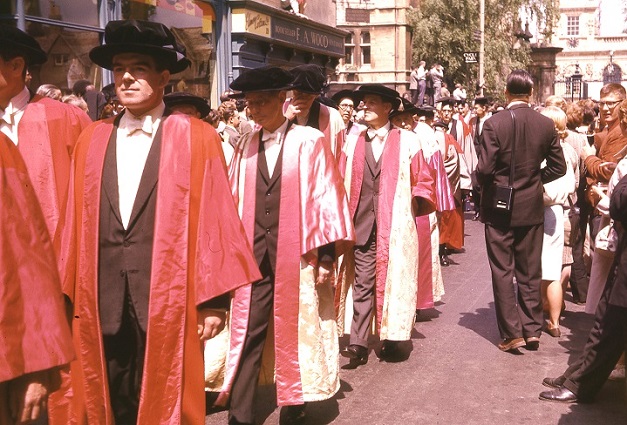 This was concurrent with the continued increase in subjects available to students – in 1955, 18 subjects were available, in 1975, 27. The majority of new subjects offered were sciences – whereas 30% of undergraduates red science subjects in 1955, 41% did so in 1975. Another notable change in the composition of the student body was the increasing number of graduate students – from 7.5% in 1960 to 17% in 1970, which can largely be attributed to a campaign of postgraduate recruitment in the 1960s by the College.

These sharp surges in student numbers were not immediately commensurate with a similar increase in teaching staff. Inevitably, this placed a huge workload on fellows (11 in 1950). It is unsurprising, therefore, that one undergraduate of the period recalls tutorials where “an overworked tutor nodded through the essay reading and then delivered a prepared harangue with little or no relation to what had preceded.” 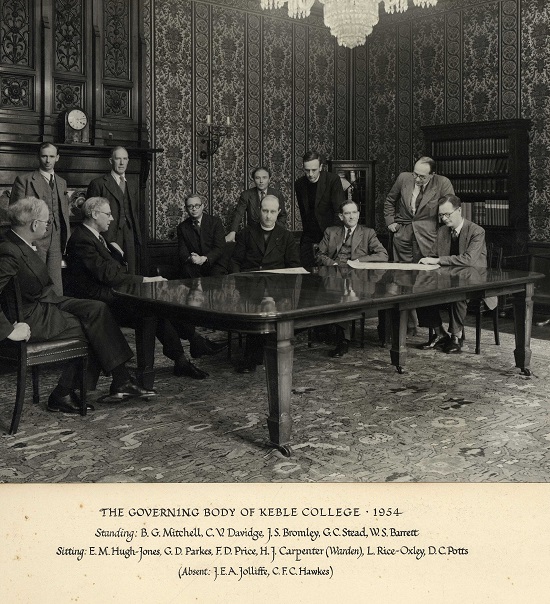 However, the 1960s and 70s were the period that saw Keble gradually emerge as one of the most progressive colleges. The College took advantage of the favourably changing climate of the University in order to increase the number of academic staff. With increased government intervention, the University pushed centralised policies out to the colleges, including allowing fellows’ salaries to be supplemented by University lectureships. These changes allowed the College to afford 35 fellows by the end of the 1960s.

The College continued to build on the progress made during the 1960s and 70s. Beginning with the admission of women in 1979, a progressive Governing Body embraced national movements in education reform, with Keble often taking the lead amongst the colleges. 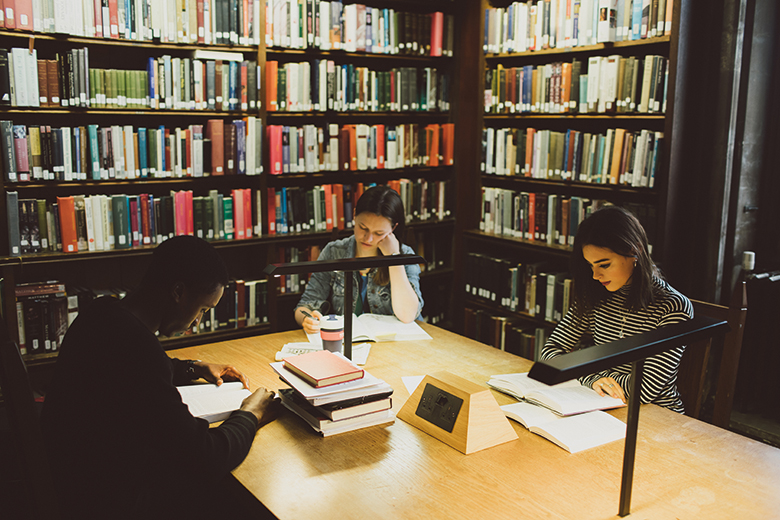 Students at work in Keble Library

During the 1980s the College held its first “open day” for prospective applicants and produced its first admissions brochure. The most radical proposal was the “Keble Scheme” wherein the College proposed to make non-conditional offers for places. The announcement of the scheme galvanised the collegiate University to conduct a general review of the Oxford admissions process – with the eventual reforms incorporating many of Keble’s suggestions.

Such changes ensured that Keble often had more first choice applicants than any other college, and thus could be very selective about the applicants it accepted. This, along with improvements in tutorial teaching (Keble was the first college to introduce student feedback on tutorials), have continued to foster excellent academic performance by the College. For example, 88% of students attained a Ist or II.I in the period 2002-2006, compared with 49% in 1952-1956.

It is striking that almost 150 years later, the concerns and complaints of Keble’s governing body so closely resemble those of the Council in the 1870s – the College’s initial lack of endowment means that it must always strive in order to survive. Yet Keble goes beyond survival, developing peer-leading innovations such as industry-sponsored fellowships and partnering with departments for new courses (Keble was one of the first colleges to accept students for the Said Business School MBA course). The newly opened H B Allen Centre reflects this tradition of academic development with novel funding, by leasing space to pioneering, University-aligned firms, and thus affording accommodation for Keble’s increasing graduate population as well as world-class research space.