The Architecture of Keble College 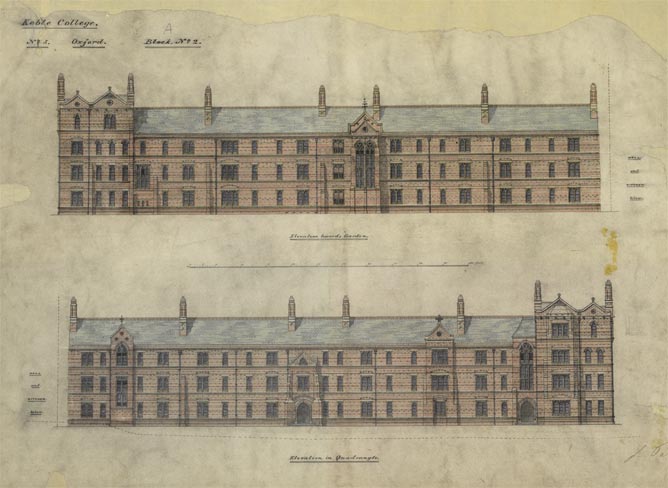 Butterfield Architectural Drawing for Keble College
Block No 2. No 5. Elevations

The original buildings of the College were designed by William Butterfield (1814-1900). Although the darling of the Tractarian movement, Butterfield was a controversial choice, as his style (a form of High Victorian Gothic) had long provoked argument in Oxford. The original Gothic revival of the 1840s was purely imitative, seeking to blend new buildings with the pre-existing architecture of the city. However, this did not satisfy Butterfield, who “sought a new form of Gothic which would both convey eternal truths and would express the spirit of the age”.

Butterfield made the most of the modest site, pushing buildings to the edge to give imposing views of the quads. The chapel is the highest and most ornate building. The library and hall fall next in the skyline, with the residential buildings the least complex. Whilst eschewing symmetry, many motifs are repeated across the exteriors and interiors of the building, adding to a sense of unifying vision. The buildings have bold, Germanic façades, and are aggressively vigorous, with their bluntness alleviated by the use of patterned brickwork. Butterfield saw the variation of the pattern as reflecting how we live our lives, with a solid foundation, growing gradually more complex as one reaches heavenward. 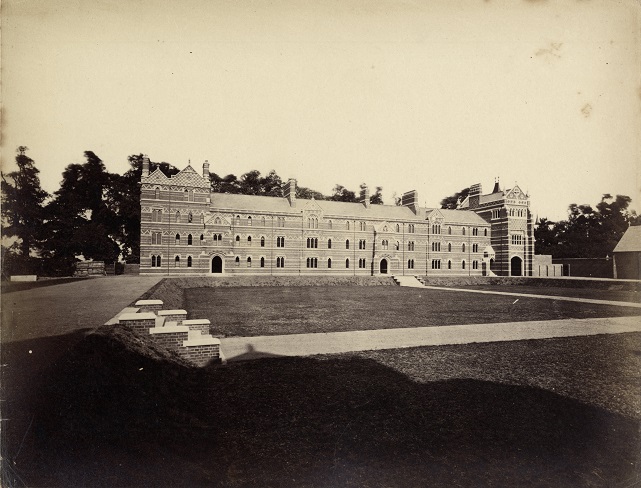 Greeted with reactions little short of horror at the time, attitudes towards Keble’s architecture have gradually softened over the years, with the College now appreciated for its striking originality. Keble’s Victorian estate is listed Grade 1, the highest ranking which is given only to “buildings of exceptional interest and… significant national importance”.

The College was lucky in that the ambitious vision of its founders allowed it to house the majority of its students for decades. However, by 1967, it had become clear to the College that there was a need to expand on a large scale. With the £500,000 cost funded via the Centenary Appeal, the project remained challenging – the site available was wedge-shaped, construction had to be phased (as funds became available), and the buildings had to stand next to Butterfield’s imposing work. To meet this challenge, the College chose an up-and-coming firm of architects, Ahrends, Burton and Koralek (ABK). 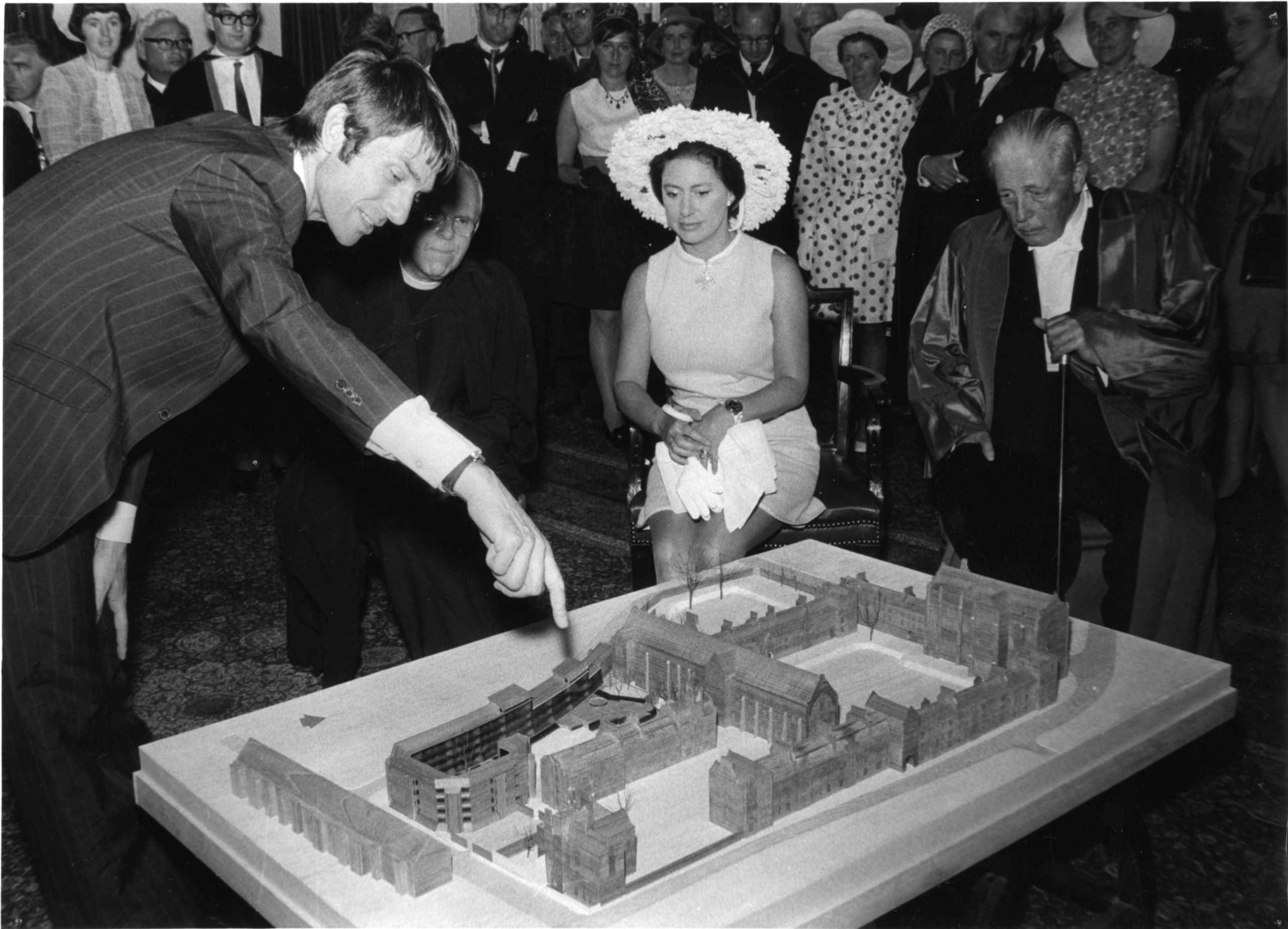 KC/COM 6/2/12 – Black and white photograph of Paul Ahrends, architect, with a model of the ABK buildings, explaining them to HRH Princess Margaret, the Chancellor and the Warden.

Whilst ABK’s architecture did not seek to imitate Butterfield, it nevertheless adopted elements from his work. The buildings follow the exterior line of the College and the roofline varies along its length, gradually decreasing as it approaches the Butterfield buildings. Yet, the architecture also manages to be innovative. The exterior is fortress-like, punctuated by slot windows, with the buff coloured brick forming a contrast to the red of the original buildings. Internally, the walls are formed by overlapping layers of glass, creating a “soft underbelly”, which mirrors Butterfield’s patterns in its reflective surface.

Once again, Keble’s choices proved to be controversial. The Architectural Review of 1977 claimed the walls “suggest the exterior of some strange zoo”, yet the Royal Institute of British Architects saw fit to award it their Southern region award in 1978 and in 2001 it became one of the youngest Grade 2* listed buildings, a ranking reserved for “particularly important buildings of more than special interest”.

The 1970s and 1980s saw a decrease in affordable “living out” accommodation, meaning private rents rose, making it more difficult for students of limited means to come to Oxford. 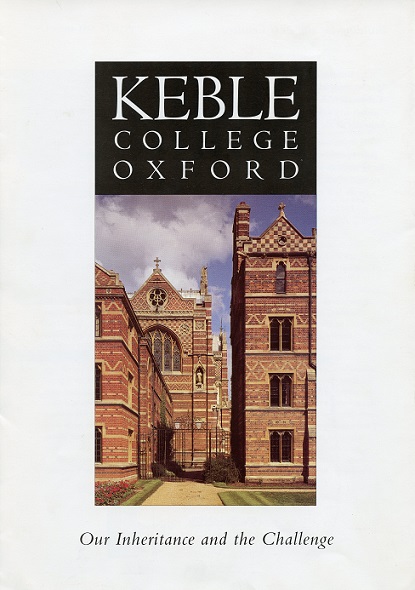 The College’s response was two new buildings in “Newman Quad” (the renamed Fellows’ Garden). Construction of the ARCO building began in 1993, following a pledge of £600,000 from the Atlantic Richfield Company (ARCO) and a highly profitable tax-based scheme. It is a largely residential building, providing 93 study bedrooms, with seminar rooms at the garden level. The second, the Sloane Robinson building, focused on the need for communal space, providing facilities including a theatre and a large meeting room. In 2001 there were sufficient funds to begin construction, including generous donations from Sloane Robinson (an asset management company formed by George Robinson (1975) and Hugh Sloane), Sir Anthony O’Reilly, and a legacy from Douglas Price. 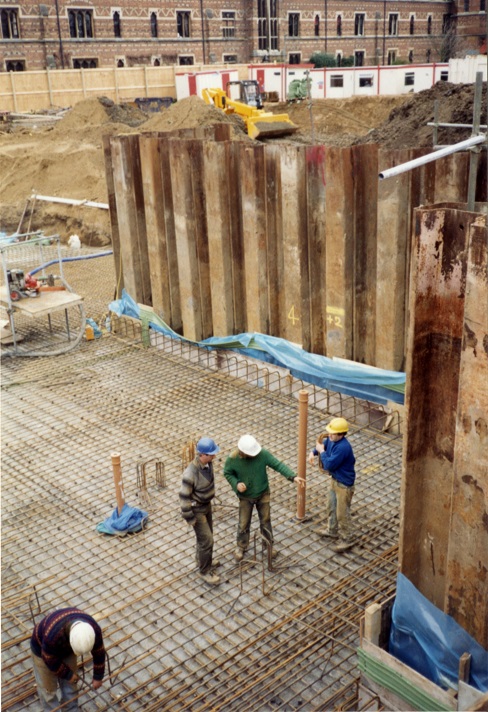 Both buildings were designed by Rick Mather, who followed Butterfield’s original plan, extending along the outside of the grounds, and contain elements that make them sympathetic to the original buildings of College. In order to achieve maximum space in the small site, the quad was lowered so that ground floor on the street side became first floor on the quad side. The ground was sloped downwards towards the buildings, allowing natural light into the space, and echoing the sunken lawn of Liddon quad.

The buildings embrace Keble’s traditional construction material, using red bricks. However, Mather felt aping the patterned nature of the older buildings would be “insipid.” His decision to lay the bricks both horizontally and vertically to create a textured surface adds interest and emphasises the fluidity of the curves of the buildings.

The resulting buildings are amongst the most environmentally friendly college buildings in Oxford. Incredibly well insulated, they require no central heating. Instead, they use state-of-the-art ground source heat pump technology, incorporating pipes embedded in the 18 metre deep foundation piles.

The H B Allen Centre

By 2003 Keble was one of the largest colleges, yet could only offer accommodation to two-thirds of its students. Furthermore, as part of the College’s vision for 2020, it needed facilities to encourage research clusters, provide space for interdisciplinary working, and increase provision for graduate students.

In July 2004 the 1.7 acre Acland site (a former hospital) came up for sale. The College won the bidding process at £10.75m, funded out of reserves and the sale of the College’s external housing stock. With the existing buildings converted to accommodation in the short term, the College turned its attention to raising the funds needed to radically develop the site. 2015 saw the transformative gift of £25 million from the H B Allen Charitable Trust, which made it possible for the College to borrow a further £40m from a pension fund on a 40-year fixed rate basis. With a further £10m donated by Old Members, construction began in October 2016.

The H B Allen Centre under construction © MICA

With Rick Mather Associates as architects (now MICA), space was obtained with sensitive efficiency through a basement being excavated across the entire site – which led to the Grade II listed core of Sarah Acland House (designed by Thomas Jackson) being supported on stilts for several months! The building reflects elements of Keble’s main site. The top floor of the building is carved away to create a roof terrace to the south west, ensuring it doesn’t loom over the Royal Oak pub; bricks similar to those used in the ARCO and Sloane Robinson buildings clad the building; and there are even echoes of Butterfield’s patterned brick on the wall above the Porters’ Lodge.

Officially opened by H.R.H. The Duke of Cambridge in 2019, the H B Allen Centre sets Keble up for the next 150 years, offering accommodation to 252 students, seminar rooms, a lecture theatre, exhibition space, a research hotel for visiting academics, a café, and business premises.