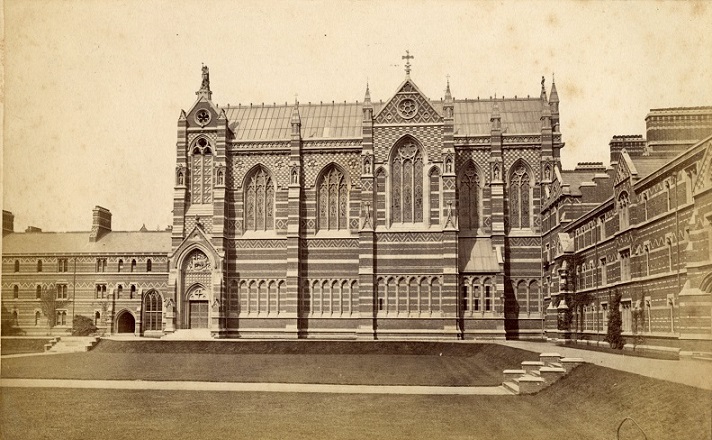 The earliest appearance of the quads in Keble was spartan, if striking. Butterfield’s (the College architect) plans for the external layout of the College simply gave the outlines for Liddon quad and its pathways, but allowed no room for flowers or trees. This was probably in part due to Butterfield’s uncompromising defence of the lines of his building. While the precarious finances of the infant College meant that the turfing of Liddon had to be deferred until after the opening, College inhabitants nevertheless took pride in its slowly improving landscape. Lavinia Talbot’s (the wife of the first Warden) diary for June 1871 excitedly records “The grass in the quadrangle is slowly making its appearance, and it has been mowed!” Pusey, the smaller and less austere of the two quadrangles, quickly developed a “desire path” from the servants’ quarters to the lodge, and preserved two apple trees – survivors from when the land was an orchard.

The space to the west of Liddon quad was designated as a garden as early as May 1870, although it continued to be let as allotments until Autumn 1871. Butterfield demanded that he be allowed to design the garden: “The precincts of a building are so important to the building itself that a building may be much injured if the ground on which it stands is not laid out by the same person who designed the building”. However, it seems the Council were determined to have this space as they wanted it, with a sub-committee developing a plan in 1873. The design, with a pronounced absence of flowers, may not strike modern eyes as a garden but the gentle slope of the edge of the lawn echoed Liddon quad, the trees selected were the height of Victorian fashion, and the soft curve of the path provided a contrast to the angularity of Butterfield’s architecture.

When Butterfield appealed again that he must be “trusted” and be allowed to construct the garden “upon all the lines which I first laid out years ago”, the Warden and Council were resolute, and no changes were made. 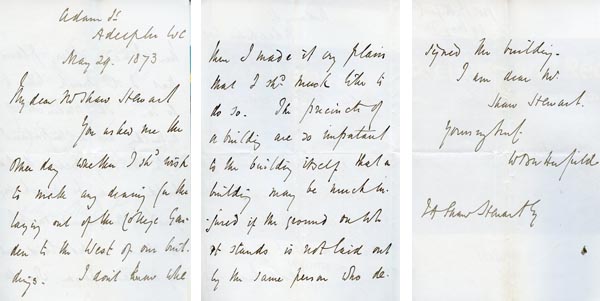 The following years saw a progressive softening of this austerity. Photographs from 1893 show the walls of the College covered with Virginia creeper, clematis and ivy. It is unclear whether this was a deliberate attempt to cover the architecture that was still so controversial. However, it wasn’t until the 1920s that the quads saw the introduction of flower beds, when the Bursar sought help from the Superintendent of the Botanic Garden, who supplied plants for the herbaceous beds in Liddon quad and advised as to their arrangement. By the 1930s, Pusey quad was adorned with rose trellises. Although no plans survive for these, photographs show a line of climbing roses along the east side of the quad, and in “the gap” by the Warden’s lodgings. 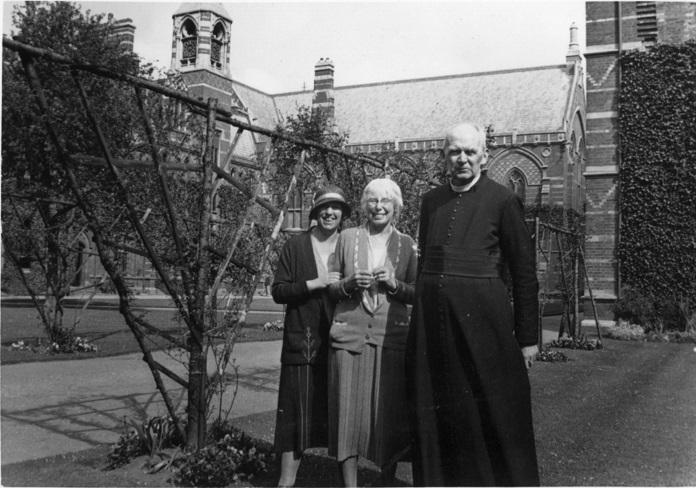 The history of the garden (known as the Fellows’ Garden) was largely affected by happenstance and the needs of the College. One of the early tutors, the Reverend Aubrey Moore, seems to have been a keen amateur gardener. The Council minutes of 1885 record thank him “for improvements in the Garden effected under his superintendence”, and show him being given an allowance for the purchase of plants. Sadly, following his departure, the garden seems have been used as little more than a convenient open space. In the late 1800s and early 1900s, a private laboratory and a telescope hut were constructed; during the First World War, pigsties were constructed as the College sought to produce its own food; and after the First World War, the College purchased and erected army surplus hutments, in which they accommodated the increased numbers of returning students. 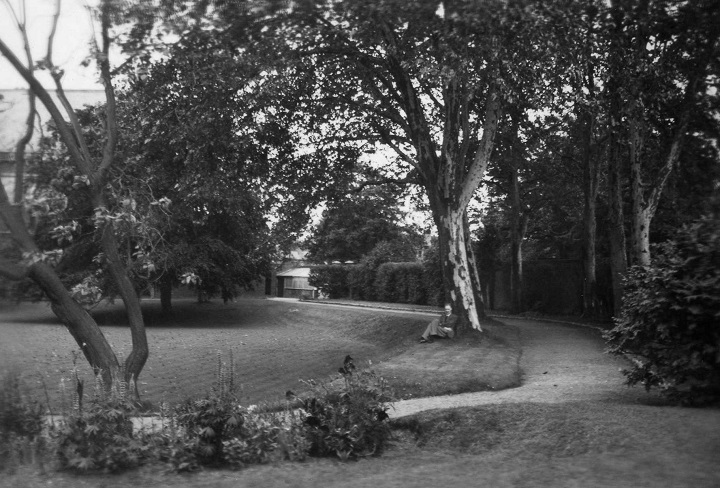 However, from the 1920s, the College made continued efforts to reclaim the garden. This included the installation of iron gates between the quad and garden, the removal of the “temporary” buildings, the purchase of plants and bulbs, and returfing the lawn. Most surprising was the need to remove a German army field gun! By 1952, the College Record proudly stated that the more imaginative planting schemes introduced in the garden and the quads had led many guests to express “a pleased surprise at its attractiveness”. 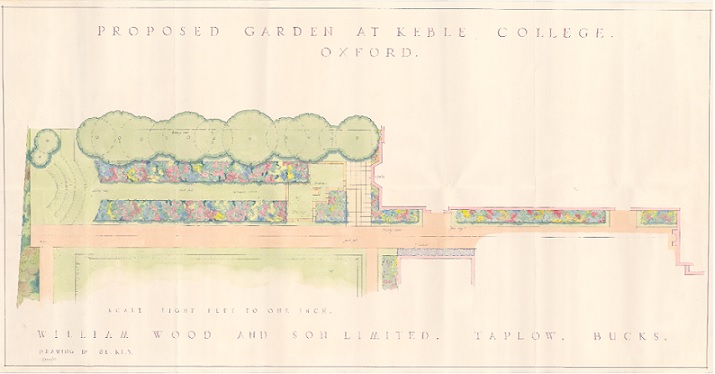 The garden came to the forefront during the College’s centenary celebrations in 1970. Under the direction of V L Griffiths (a Research Fellow), the space was transformed into a quintessential Victorian garden. Rather than replicate the original 1870 planting, Griffiths took the opportunity to showcase some of the styles most favoured by gardeners at the time of the College’s construction. The borders featured vivid plants such as pelargoniums, petunias and fuchsias, accompanied by ferns, hollies, and hostas. A more sedate area offered a glimpse into the romantic side of the Victorian character, with heavily scented “old roses”, peonies, and Double Sweet Rocket. The west side of the garden explored the Victorian passion for architectural gardening, with clipped shrubbery and ornamental stoneware. 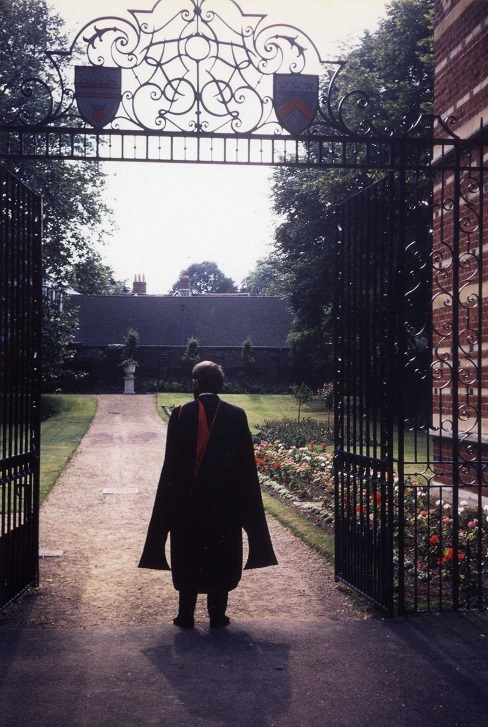 The construction of the Hayward and De Breyne quads offered new spaces for planting, and the radical style of architecture gave scope for a more experimental palette of plants. Under the guidance of J K Burras (the superintendent of the Botanic Garden), the lower beds were given a sub-tropical feel, whilst the roof beds were planted with ramblers and climbers, to cascade down the buildings. De Breyne quad was to be dominated by a plane tree, with a mature specimen being craned in with specialist equipment.

KC/SB 5 B1 – Mounted colour photograph of the planting of the London Plane in de Breyne Quad, 1973

Building work was to be the impetus behind further change and regeneration as the Fellows’ Garden was transformed into Newman Quad. During construction of the ARCO building (1993-1995), the architect, Rick Mather, introduced a gentle slope down to the building, to allow light into the basement rooms. To accommodate the Sloane Robinson building (opened 2002), the lawn was lowered by a further metre, allowing natural light into the basement theatre.

RM/20 back – View from Fellows Garden [Design] by Latner for Arco Building, 1993

In 2003 a decision was made to comprehensively improve the planting and grounds of the College. The climbing plants were removed from Butterfield’s buildings, as the College expressed its pride in the “holy zebra” brickwork. Under the direction of landscape consultant, Sarah Ewbank, each quad was given a “personality”. Liddon quad’s dark shrubbery was removed and blue, white, and cream flowers were set against contrasting textures of foliage. Pusey retains its more relaxed atmosphere. Dominated by the copper beech tree, the colour scheme of lilac, purple and crimson echoes the foliage and “woodland” areas and autumn berries provide forage for wildlife. Hayward quad was cleared of bicycles and sheds, and a half-moon bed was added. This, along with the apple trees, provides an inviting, practical area. Newman quad showcases Mather’s vision – the challenging slopes of the edges of the quad are exploited by the planting of falling, curving, and vertical lines of evergreens, and plants are specially selected to provide habitat for wildlife.

The water feature, designed to celebrate the engagement of a Keble alumna taking place in the garden, reflects the central role that the grounds of College have in the lives of the students and staff who pass through these surroundings.