From the founding of the Keble College Boat Club (K.C.B.C) through 1956, the captain of boats each year preserved a detailed chronicle of important club data. These Captain’s Books methodically record the composition of each year’s crews, the characters of the crewmembers, training philosophies, records of appeals to old members for money, itemized lists of boat club expenses and sometimes even crewmember diets. 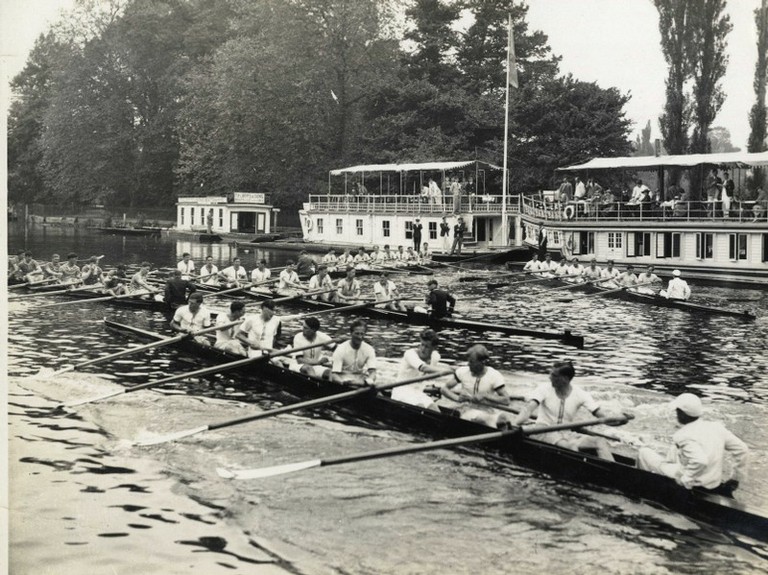 The captains’ notes are irresistibly frank when commenting on less gifted rowers: “on the principle of 3=dullest plugger, a good three,” or on rowers who obviously don’t mix well personally with the rest of the group: “Amazing capacity for idiotic arguments over trivialities. Most ugly but indispensable.” These volumes are our first source for information about the relative strength of Keble rowing throughout the years–both in terms of rowing prowess of and general levels of participation. 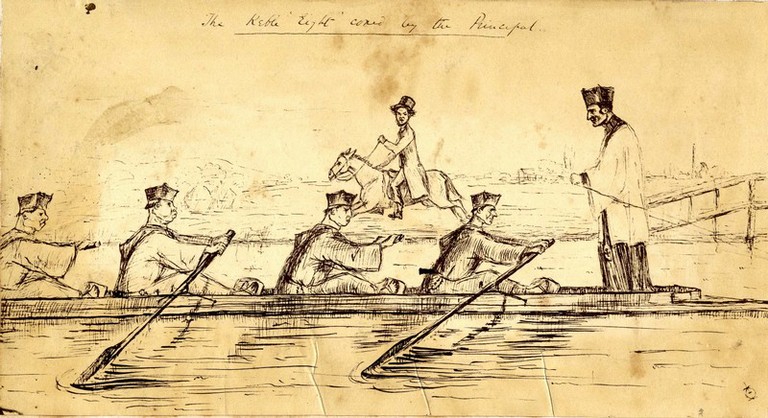 Early prejudices about Keble rowing; Cartoon ‘Coxed by the Principal’

The Captain’s Books tell us that Keble rowing had auspicious beginnings, climbing to fourth in Summer Eights in 1879 and 1888 and even gaining headship during the week in Torpids in 1881 and 1882 before being displaced by the end of the week. Keble also had two rowing blues in this period, G. F. Burgess (1878) and F.M. Hargreaves (1880). Keble would register only one more rowing blue and two more blues coxes in the following 75 years and would not have two university rowers up at the same time again until 1959. The VIII would not hold a position on the river as high as fourth again before becoming head of the river for the first time in 1963.

Captain Graham Buckley was able to complain as late as 1952 about the lack of cache possessed by Keble when it came to attracting experienced rowers from England’s top rowing schools: “the truth is that Eton, Radley, Shrewsbury, and Bedford are not used to sending their rowing sons to Keble… How we would like to hear that the Eton First VIII stroke was coming up to Keble next Term”. Within five years, Buckley would see his wish for schoolboy rowers granted in abundance, this onrush of rowing talent ushering in the age of Keble dominance on the river. 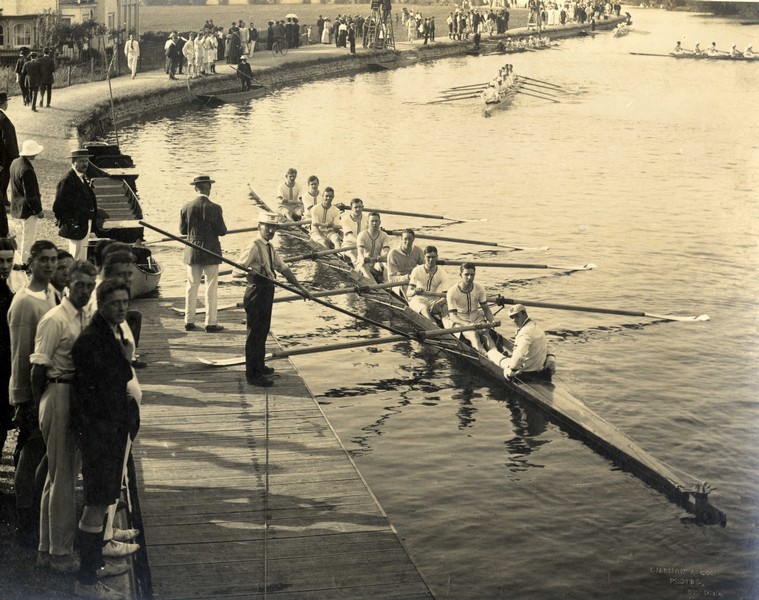 While the number of freshmen who came up with rowing experience is a perennial cause for concern among the captains, Keble always managed to recruit large numbers of eager freshmen, though some each year inevitably didn’t make it through the weeding-out process. In 1902, the captain complained in his Captain’s Book when “only” one half of the total number of freshmen signed up to row, a complaint repeated in 1912. Smaller colleges were sometimes lucky to be able to put out one eight-man crew for Torpids in the spring (a race reserved for second crews through 1908) and one for Summer Eights (the highlight of the intercollegiate racing calendar). In 1875, Keble made history by being the first college boat club to introduce a second Torpid due to strength of numbers. Keble would routinely field several boats for Torpids and, when it became accepted practice, multiple boats for Summer Eights as well. Today Keble frequently registers the largest numbers of novice rowers relative to other colleges. Keble has entered as many as fifteen percent of the total number of crews in the novice Christ Church Regatta in recent years, repeatedly fielding more boats than any other college, with upwards of 60% of Keble freshers (undergraduate and graduate) participating in novice rowing in peak years. 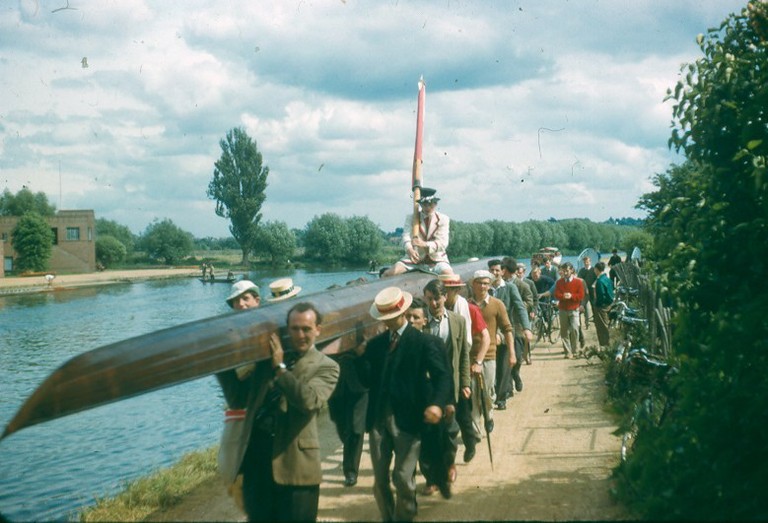 Keble’s rowing fortunes first began to turn around in the late 1950s. This change is directly attributable to the influence of Vere Davidge, a Bursar with a noted (and notorious) passion for rowing. Davidge had been involved with Keble rowing in at least some capacity, either coaching or offering general support and guidance to the club when it sought to raise funds for special projects, from the first year he was associated with the college in1927. In the mid 1950s, however, he began to push for the admission of candidates from rowing schools. In the summer of 1958, four Keble men won the Visitor’s Cup at the prestigious Henley Regatta. Three of these, along with a fourth Keble man, would head to Rome to form the nucleus of the Great Britain Olympic VIII in 1960 to become Keble’s first rowing Olympians. For the next twenty years, Keble would average seven varsity rowers (those having earned either Blues or Isis colours) in college per year. As testament to the impact Keble made on university rowing in this period, in 1961 Ian Elliot (one of Keble’s 1960 Olympians) became the first Keble man to hold the position of president of the OUBC. Keble men held this position in seven of the next fifteen years, but not again until 1996.

The first VIII in Summer Eights, after spending more than half a century bouncing around near the bottom of the second division or top of the third (each division consisting of twelve boats), stormed up twenty-four positions in just six years to gain the headship, for the first time, in 1963. The boat was comprised entirely of varsity rowers save one, and all had rowed at Eton, Shrewsbury, or another of the noted rowing colleges. In 1962, seven out of the sixteen spots on Senior Trial Eights (those trying to earn a seat in the Boat Race against Cambridge) were awarded to Keble rowers, an unprecedented number. In 1964, six of the nine men in the Oxford boat against Cambridge were Kebleites. In 1967, Keble either won or was represented in the winning crew of every single competition organized by the OUBC. 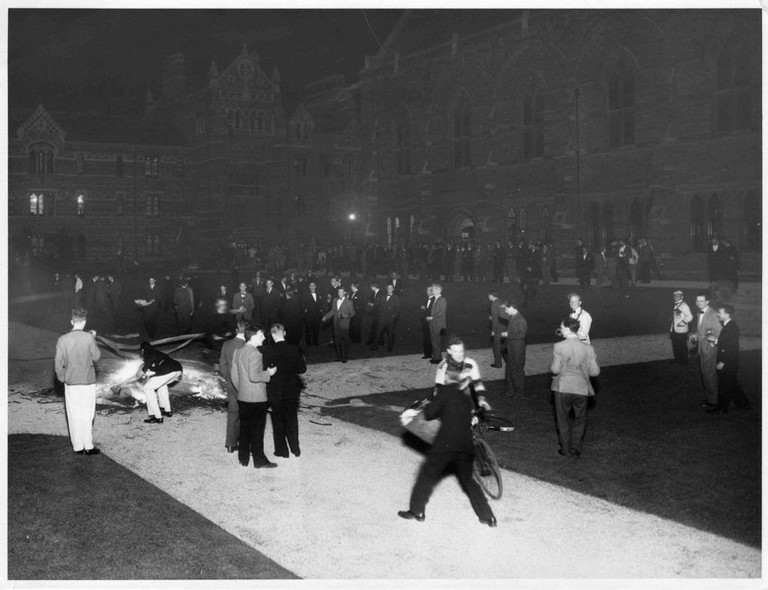 Burning of boat after Bump Supper, 1950

While the influx of top-quality rowers certainly had a clear impact on Keble’s position on the river in Eights, the demands of varsity rowing could also weaken the KCBC. Though there were several years where there were more than eight men in college with colours, only in one year (1969) was the first eight in Summer Eights comprised entirely of men with varsity colours. After gaining the headship in 1963, Keble lost it in 1964, falling to fourth in 1966 because varsity training pulled away many or all of the college’s top rowers. It is a testament to the strength of KCBC across the board in this period that, when rowed by non-varsity men against the stiff competition at the top of the first division, Keble only lost three places in these years. Regaining the headship in 1967, Keble held on to it for four successive years and 6 of the next ten.

Even as general participation levels in college sport in general dwindled between 1950-1970, with a number of the minor collegiate rowing events dying out due to lack of interest in the 1970s and 1980s, Keble registered a great increase in participation in Summer Eights. Having fielded three or four crews for Eights for most of the college’s history, Keble had six crews on the river in 1962 and, as the most comprehensive data show, averaged seven crews per year over the next ten years, with twenty percent of the college participating in some capacity in peak years. Large participation has always been a noteworthy characteristic of the KCBC, but before 1960, college participation in Eights generally topped out at around thirteen percent. In 2007, around seventeen percent of college men and women rowed in Eights in some capacity.

The crew cards from these years suggest the increasingly less serious and democratic attitude with which Oxford students were approaching college sport by the 1960s and 1970s. The motto of Keble’s sixth eight in 1970 was “we must keep a sharp watch, and try not to paddle swiftly.” Behind them rowed “The John Keble and Vladimir Illyich Ulianov Memorial VIII,” named in playful commemoration of the 1970 centennial of both the founding of Keble College and Vladimir Lenin’s birth. Levels of participation remained high from the 1960s onward; it was not unexpected for Keble to enter more boats than any other college on the river, and captains continued to report great levels of enthusiasm even as the first VIII’s position on the river began to fall in the early 1980s, slipping out of the first division by the early 1990s. 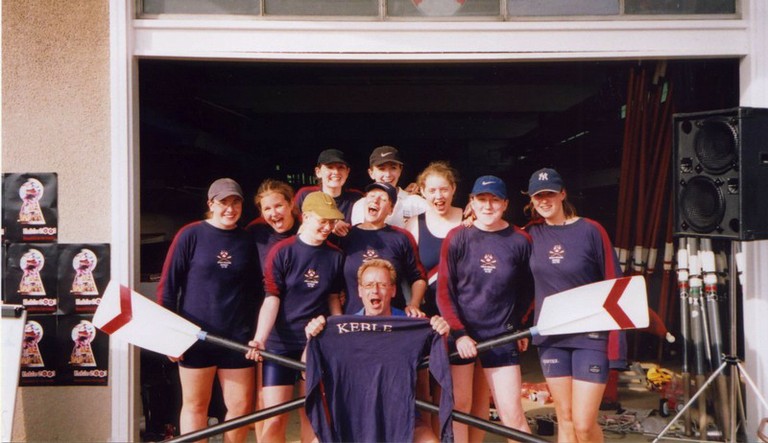 Keble Women fielded two boats in their first year,1980, and has had many more varsity rowers in its first 28 years than the men’s club did in its first eighty years, averaging two varsity rowers per year (including Lightweight rowers) from its founding to today. Participation of Keble women in Eights has been very high, with twenty-five to thirty percent of Keble Women participating in peak years. As the proportion of women in college has grown in recent years, around ten percent of women in college have been participating in Eights each year. Though the highest the women have been on the river was 9th in Torpids in 1991, their position in Eights and Torpids has generally been improving since 2000, now holding consistently near the top of division two or bottom of division one, up from their historic low finish in division three in 1999. 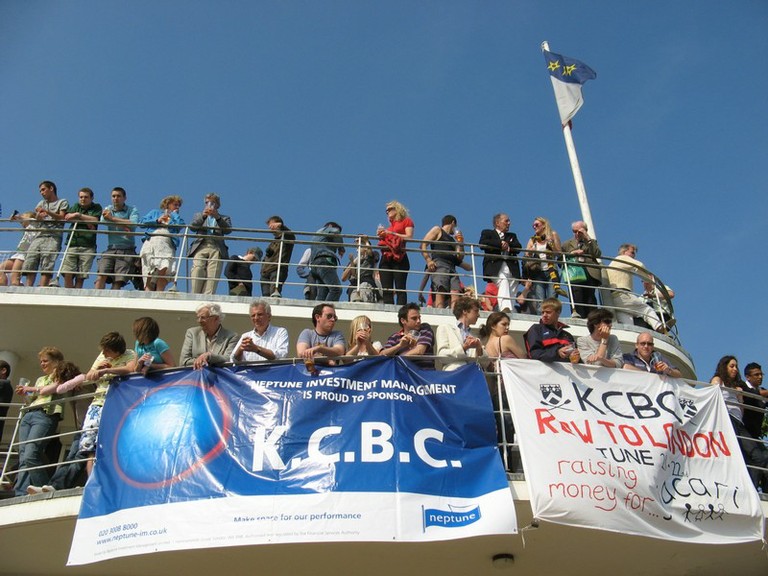 The costs of equipment and professional coaching needed to be competitive at the highest collegiate levels continued to rise in the 1980s and 1990s. In the mid-1990s, it became obvious that if Keble rowers were going to maintain any hope of again achieving the historic heights attained by Keble rowing in the 1960s and 1970s, the KCBC was going to need new channels of financial support. In 1995, Robin Geffen (who rowed in the 1st VIII in 1979, at the tail end of Keble’s strongest years on the river) spearheaded the founding of the Keble Rowing Society to rally and organize the support of old Keble members for the KCBC and to provide general support to the college. As a result of these efforts, along with the corporate support of Geffen’s company Neptune Investment Management, as well as the independent contributions of individual old members, the KCBC quickly became one of the best-supported rowing clubs in the university. The club has certainly been on an upward trajectory since this significant restructuring of the club’s funding. In 2006, the KCBC reached an important landmark in Summer Eights when both men’s and women’s clubs gained places in the first division concurrently for the first time in Keble history. Keble regained the headhsip of the river in 2019.

The prestige of Keble rowing has been enhanced with these successes of Keble’s men and women, as well as through the international representation of such old members as 1992 Canadian Gold Medallist Bruce Robertson, 1992 South African Olympian Andrew Gordon-Brown, 2004 Dutch Silver Medallist Gerritjan Eggenkamp, and 2004 Great Britain Olympic Gold Medallist Ed Coode.