Music has formed part of the life of Keble from its earliest days. In November 1870, merely a month after the first undergraduates arrived, Lavinia Talbot recorded in her diary that she had joined the new College choir. Music was the first non-sports society to be covered by the expenditure of the Amalgamated Clubs (a central fund which distributed subscriptions to societies within College) in 1891. One notable fixture of the early musical life of the College was the “smoking concert”, featuring a large number of “comic songs”, and undergraduate performers, both from Keble and other colleges.

From as early as 1902, the mainstay of the College’s musical year was the Summer Concert (later renamed the Eights Week Concert). This was a lavish affair, staged in hall, with a marquee raised in Liddon quad for refreshments during the interval, and a red carpet laid up the hall stairs. Organised by the organ scholar, the College choir was supplemented by dons and the ladies of North Oxford, and a professional orchestra from London.

Post World War II, the musical programme centred around organ recitals (often featuring previous organ scholars) and termly concerts. These featured professional musicians and groups, such as the London Baroque Ensemble. They were extremely popular, with typical attendance varying between 120 and 200. As the years passed, less emphasis was given to bringing in outside professional musicians, and more space was given to “in-house” talent. For example, in 1960, the Music Society gave a full stage production of Purcell’s Dido and Aeneas, and in 1975 a concert featured original compositions by the organ scholar.

The following decades saw a gradual widening of activities – the introduction of open air summer concerts in the 1970s, lunchtime concerts in the 1980s, the revival of the Oxford Classical Orchestra and Chorus in the 1990s, a collaboration with the Royal Academy of Music in the 2000s. These days, music features high on Keble’s social agenda, ranging from the annual Early Music Festival to X-Factor entries. 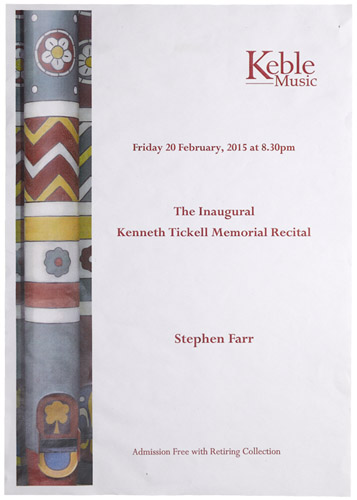 Of course, all of this is against the backdrop of the College Choir, a mainstay since the College’s opening. The Choir continues to thrive, with overseas tours, the release of CDs, and broadcasts on the BBC.

Early drama societies in College offered social entertainment in an era before television or radio. The Mummers Society (est. 1920) and The Druids (1933) gathered in student bedrooms to read plays, assigning parts to individuals. It wasn’t until 1924, with the foundation of “Keble Plays” that there was a society dedicated to the performance of drama. Hosting annual performances in hall during Eights week, the society performed a wide variety of material over the years, ranging from the 17th century German Fratricide Punished to the rock musical Pygmalion at the Speed of Sound. 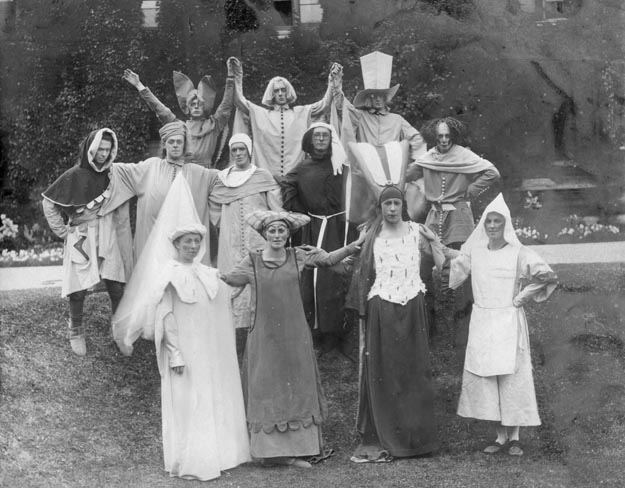 Following World War II, plays were initially performed again in hall, but this was declared to be “unsafe”. There followed a number of years of nomadic performances in venues such as St Peter-in-the-East, and the Clarendon Press Institute. The Fellows’ Garden became a popular summer venue, although it did present some difficulties – such as the absence of the leading man in 1964 after he slipped on the grass, resulting in a visit to the Radcliffe Infirmary.

By the 1970s, the Tyrell Society (as it was then called) had suffered periods of abeyance, although joint performances with other institutions gave highlights, such as 1988’s production of Who’s Afraid of Virginia Woolf? with Centre for Medieval and Renaissance Studies. Through the 1990s, although participation in drama was apparent at Keble, this was largely through the provision of funds to other companies, individual success with OUDS, or through the composition of plays. 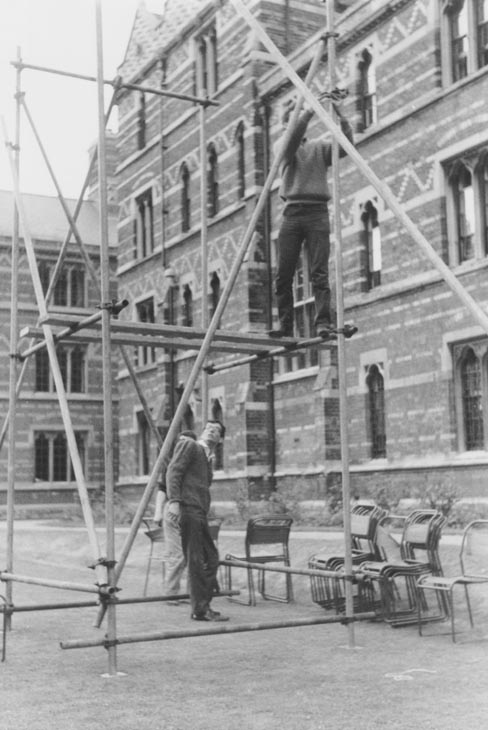 It wasn’t until 2003, with the opening of the state-of-the-art O’Reilly Theatre in the new Sloan Robinson building, that the College once again became a focal point for drama within the University. The Tyrell Society was rebranded as the Martin Esslin Society (in honour of the dramatist and critic whose library and archives were donated to the College by his daughter Monica, one of the first female Keble undergraduates) and now comprises a panel of five undergraduates who select productions for the O’Reilly theatre and act as a funding body for student production companies.

The societies of Keble provide a fascinating reflection not only of the nature of student life and society, but also the variety of personalities the College has been home to.

Alongside drama and music, the societies founded in College provided affordable social and intellectual entertainment. The Essay and Literary Club, founded in 1875, met weekly during term. Once a term, each member was required to read an essay of their own composition (on topics such as “Prejudice” and “The Influence of Gunpowder on Civilization”) and two readings of an author of their choice (Milton proved a perennial favourite). This was later superseded by the Wills Club (founded 1941). The Debating Society (founded in 1873) provided debates hot topics of the day such as “Gladstone has shown himself unfit to enjoy the confidence of the nation” in 1876 and “This house deplores the failure of the United Nations to support a United Congo” in 1961. Subject specific groups flourished, such as the Tenmantale History Society, which celebrated its 1000th meeting in 1970. During term, members gave papers on historical topics, but the highlight of the year was the annual dinner, with noteworthy speakers and “a cauldron of punch”. In contrast to this, some societies were ephemeral and the work of a few enthusiasts, surviving only a few years, such as the Mars Hill Society (1926-1930) where the entire aim of a meeting was to tell or hear something new. 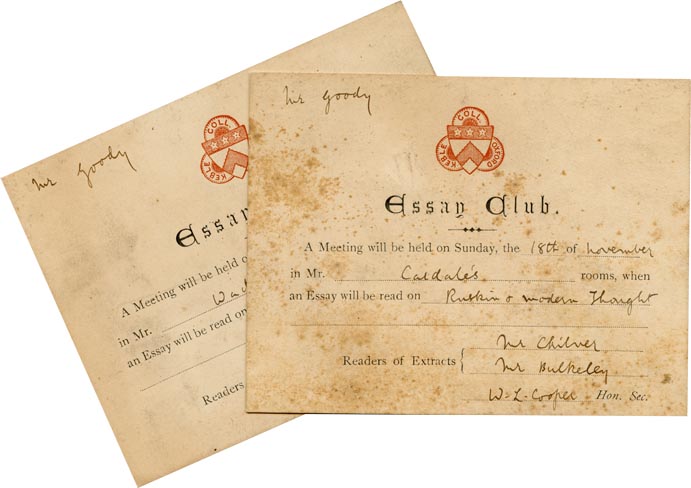 However, by the 1970s, with increased focus on academic achievement and the increased availability of other social distractions, the popularity of such groups had begun to dwindle. The Record of 1976 commented “Clubs… such as used to… multiply at Keble as in other colleges, seem to have little attraction for present-day undergraduates”. It is therefore unsurprising that those that continued were subject specific, such as the Tenmantale or the Harris Law Society. Some adapted – the Mitre Society, originally formed as a dining society for prospective clergy, reformed in 1972 with a focus on chapel goers and musicians. New groups did rise to fill the gaps, but rather than fill a social need, they engaged with pertinent student topics, such as the formation of the Owen Society 1970 (a left-wing radical group) and the Women’s Group in 1991. 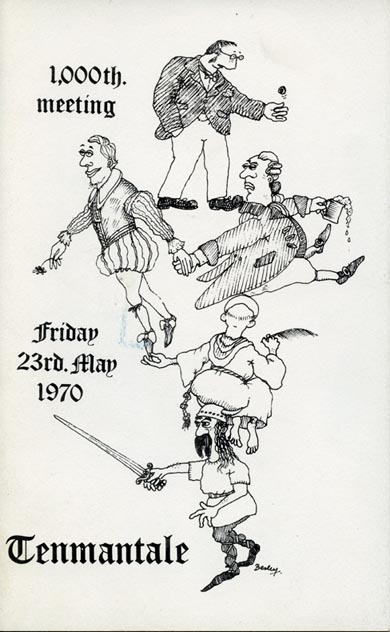 Today, members of Keble are notable participants in diverse University-wide societies, such as the Douglas Adams and Archaeology Societies. It is perhaps fitting that, given Keble’s spiritual beginnings, the Christian Union and Hursley Society (theological discussion) are amongst the surviving College societies.

Information on the role sport has played at Keble can be found through these pages: The Early Years, Between the Wars, Post Second World War, Rowing.