In 2012, Keble College became a member of the Oxford Conservation Consortium (OCC), a non-profit co-operative book conservation studio providing collection care and conservation treatment for the historic library/archive collections of 17 colleges of the University of Oxford. In the last seven years at Keble, we have prioritised the manuscript collection, which numbers some 90 manuscripts, surveying them to determine their condition (with a view to digitisation), then carrying out repairs, boxing the collection, and overseeing the environmental conditions where they are stored. Following on from the successful fundraising campaign to digitise the Regensburg Lectionary, we were called in to evaluate it specifically for photography.

The preparation of the Regensburg Lectionary, MS 49, began some months prior to actual digitisation in January 2017. The manuscript is large and very heavy. Moving it and supporting it during reading is difficult, and support during digitisation when every leaf is photographed is crucial. It is also equally important to examine it carefully before digitisation to determine its condition, and identify any problem areas in advance of photography, for the protection of the manuscript and the photographer!

The manuscript consists of 308 parchment leaves in quires sewn on five double supports covered in full leather with an alum tawed, pigskin chemise. The two full-page illuminations and a selection of other illuminated initials were examined using digital magnification (approx. 20x) to check the stability of the pigments particularly in areas of previous pigment loss or damage, and to assess whether further damage might occur during digitisation. The losses all appeared to be historic and the remaining pigment in those areas was found to be stable and not friable or flaky. There were no pigment or gold flakes in the gutters. The full-page illumination (below) on fol. 235v was slightly damaged, particularly in the lower area (hell, devil, damned), where there was significant pigment loss, making the image slightly hard to read. In other areas, there was some abrasion of the pigments but there did not appear to be any actively deteriorating areas. 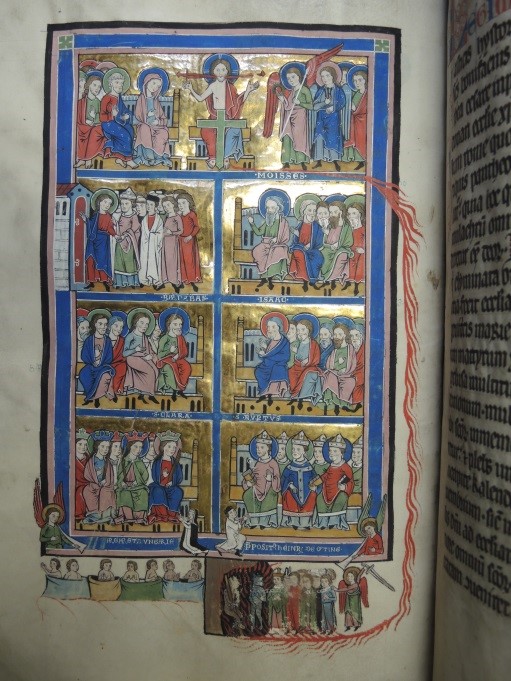 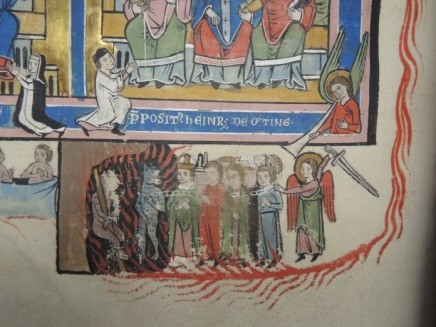 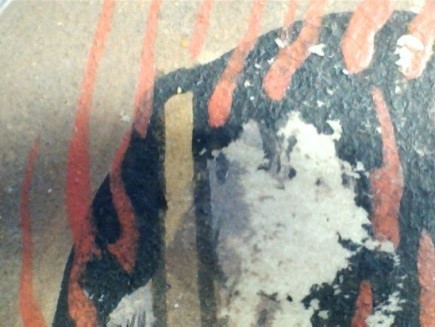 Examination of several smaller initials under magnification revealed small but stable losses to both the pigments and gilding. 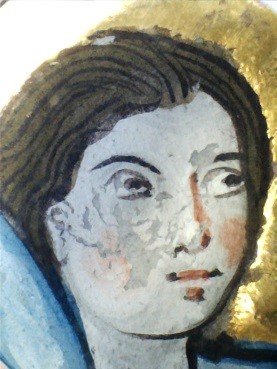 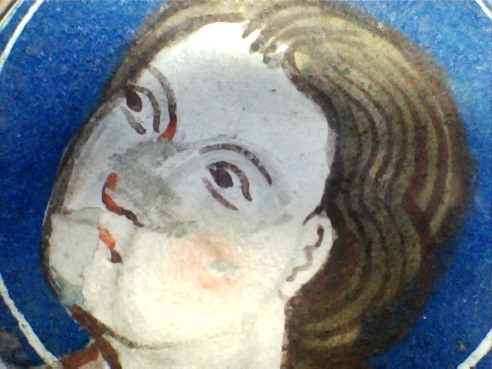 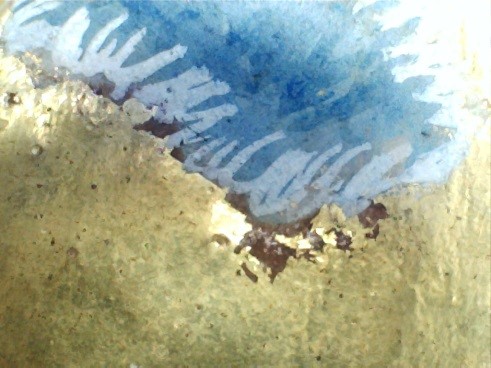 Fol. 7r details of loss of pigment and gilding

The colourful silk curtains sewn at the top of the small initials, to cover and protect them, were in a variety of states. Some were very badly creased, others were coming away from the leaf as the sewing thread had come undone. 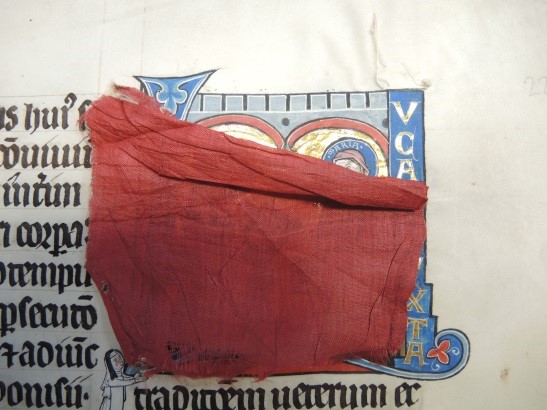 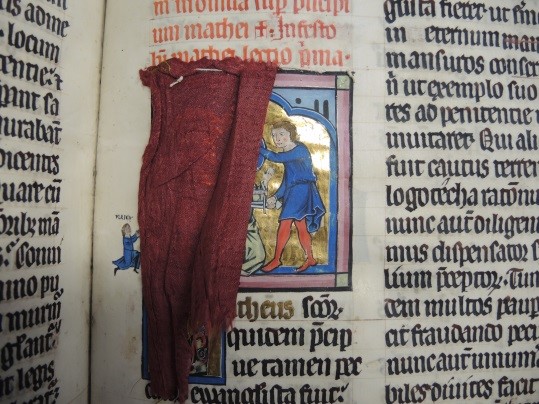 In the end, the only interventive conservation treatment deemed necessary was to surface clean the outer margins of the parchment leaves with a latex sponge. The greatest accumulation of dirt was found where the outer margins of leaves were tightly pleated, allowing for ingress of a light brown dust which was easily removed.

Satisfied that the condition of the manuscript was sound, preparations were made for the actual digitisation. Temperature and relative humidity recordings were taken in the room to be used for the photography to ensure stability; this is important in view of the potential reaction of parchment leaves to changing humidity levels, which may cause cockling and damage to highly illuminated leaves with layers of pigment and gilding. The manuscript was carefully packaged and wrapped before moving it from the manuscript store.

The digitisation took place over five days in January 2017 and was undertaken by Colin Dunn of Scriptura. A specially engineered cradle was used to support the Lectionary during the digitisation process in which the angle of the support plates can be adjusted to prevent strain caused by uneven pressure during opening. 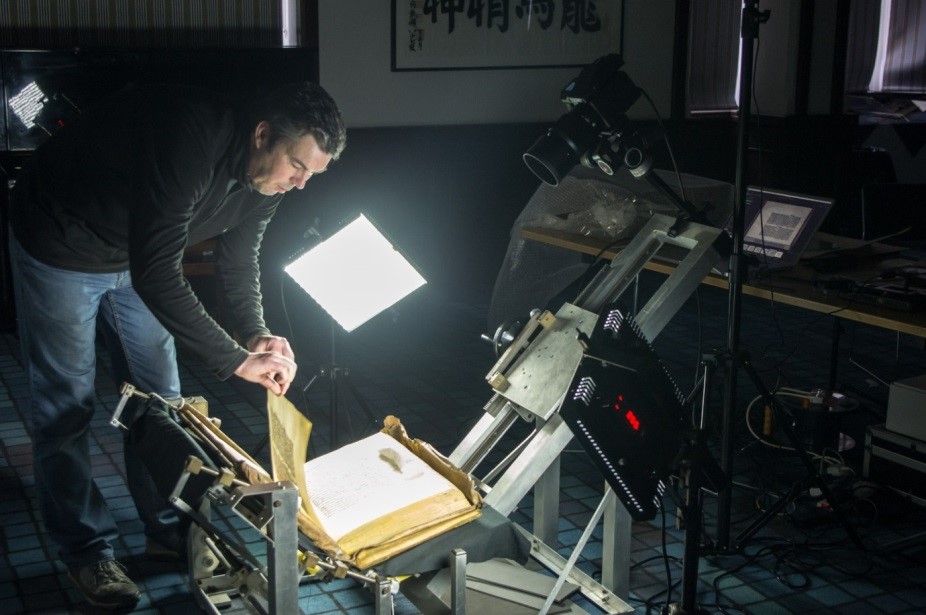 The OCC conservation team assisted during the photography and were very pleased that  the process was completed without incident. However, as anticipated, the parchment leaves did undergo some slight dimensional changes and at the end of each day, the manuscript had clearly expanded and was noticeably tighter in its box. It was carefully and gently eased into place and returned to the manuscript store each night.

Once all photography was complete,  the Lectionary was re-examined to check its condition and that no alteration to the pigments or gilding had occurred.  All was well, no permanent change to the manuscript could be observed and we were pleased that it will now be accessible to far more readers than before, while keeping Keble’s treasure safe for the future.